The 2017 PEN World Voices Festival has begun in New York. The 2015 festival, which focused on African literature, was co-curated by Chimamanda Ngozi Adichie. Here is a description of the 2017 festival on PEN’s Website.

The thirteenth annual PEN World Voices Festival will take on some of the vital issues of the Trump-era, with a special focus on today’s restive relationship between gender and power. Taking place in New York City, May 1-7, 2017, the weeklong festival will use the lens of literature and the arts to confront new challenges to free expression and human rights—issues that have been core to PEN America’s mission since its founding. At this historic moment of both unprecedented attacks on core freedoms and the emergence of new forms of resistance, the Festival will offer a platform for a global community of writers, artists and thinkers to connect with concerned citizens and the broader public to fight back against bigotry, hatred and isolationism.

Here are the ten African authors participating in the 2017 panel discussions. Their accompanying profiles are from PEN’s Website. Abubakar Adam Ibrahim is a Nigerian writer and journalist. His debut novel, Season of Crimson Blossoms, won the 2016 NLNG Nigeria Prize for Literature. His short-story collection, The Whispering Trees, was longlisted for the Etisalat Prize for Literature, and its title story was shortlisted for the 2013 Caine Prize for African Writing. Abubakar was named one of the most promising Sub-Saharan African writers under the age of 40 by Hay Festival Africa39. Basma Abdel Aziz’s novel The Queue received a 2014 English PEN Translates Award, and was published in English by Melville House in 2016. Her previous books include the short story collections May God Make it Easy and The Boy Who Disappeared, as well as the nonfiction works Beyond Torture and The Temptation of Absolute Power. She lives in Cairo.

Binyavanga Wainaina is the author of One Day I Will Write About This Place and the founding editor of Kwani?, a leading African literary magazine based in Kenya. his work has appeared widely in The New York Times, Vanity Fair, Granta, The EastAfrican, The Sunday Times, and The Guardian. TIME named Wainaina one of their 100 Most Influential People of 2014.

Nigerian writer Chimamanda Ngozi Adichie is the author of novels Purple Hibiscus, Half of a Yellow Sun, and Americanah, and the short story collection The Thing Around Your Neck. Her noted speeches include the TED Talks The Danger of A Single Story and We Should All Be Feminists. Adichie is also a recipient of the Commonwealth Writer’s Prize, the Baileys Women’s Prize for Fiction, and the U.S. National Book Critics Circle Award. Chinelo Okparanta is the author of the short-story collection Happiness, Like Water and the novel Under the Udala Trees. Her honors include an O. Henry Prize, two Lambda Literary Awards, and finalist selections for the Young Lions, the Caine Prize, and the Rolex Mentors and Protégé Arts Initiative. She currently lives in Pennsylvania and teaches at Bucknell University. Helon Habila—the author of the novels Waiting for an Angel, Measuring Time, and Oil on Water—is an associate professor at George Mason University. His latest book, The Chibok Girls, is a work of nonfiction. 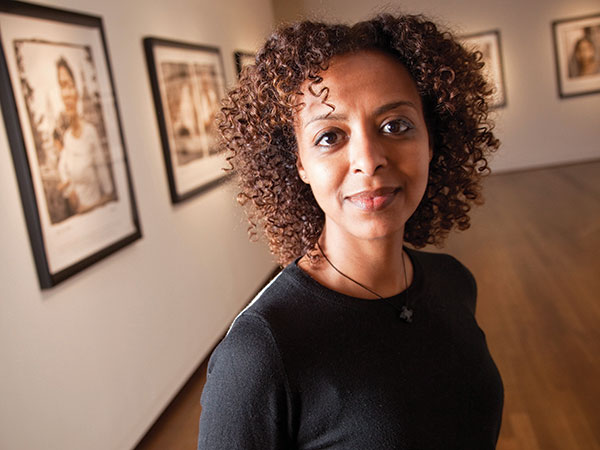 Maaza Mengiste’s debut novel, Beneath the Lion’s Gaze, was named one of the ten best contemporary African books by The Guardian. Her writing can be found in The New Yorker, Granta, The Guardian, the New York Times, and Guernica, among others. A recipient of a Fulbright Fellowship, Mengiste sits on the boards of Words Without Borders and Warscapes. Her next novel is forthcoming. Sarah Ladipo Manyika was raised in Nigeria, and has lived in Kenya, France, and England. Manyika teaches literature at San Francisco State University, and serves on the boards of Hedgebrook, and the Museum of the African Diaspora in San Francisco. Her second novel, Like a Mule Bringing Ice Cream to the Sun, was shortlisted for the 2016 Goldsmiths Prize. A novelist, photographer, and the current photography critic of The New York Times Magazine, Teju Cole is the author of Every Day Is for the Thief, Open City, and Known and Strange Things. Cole is also the recipient of the 2012 PEN/Hemingway Award, the Internationaler Literaturpreis, and the Windham Campbell Prize. His forthcoming book, Blind Spot, is a genre-crossing blend of photography and text. Trevor Noah is the most successful comedian in Africa, and is the host of the Emmy® and Peabody® Award-winning The Daily Show on Comedy Central. Noah will debut his 9th new comedy special “Afraid of the Dark” on February 21 on Netflix. In November 2016, Trevor released his first book Born a Crime: Stories from a South African Childhood, which was an instant New York Times bestseller. Yewande Omotoso is an architect, with a masters in creative writing from the University of Cape Town. Her debut novel Bomboy (2011 Modjaji Books), won the South African Literary Award First Time Author Prize, and was shortlisted for the Etisalat Prize for Literature. She was a 2015 Miles Morland Scholar. Yewande’s second novel The Woman Next Door (Chatto and Windus) was published in May 2016.

Have Chimamanda and Abubakar settled their fight?