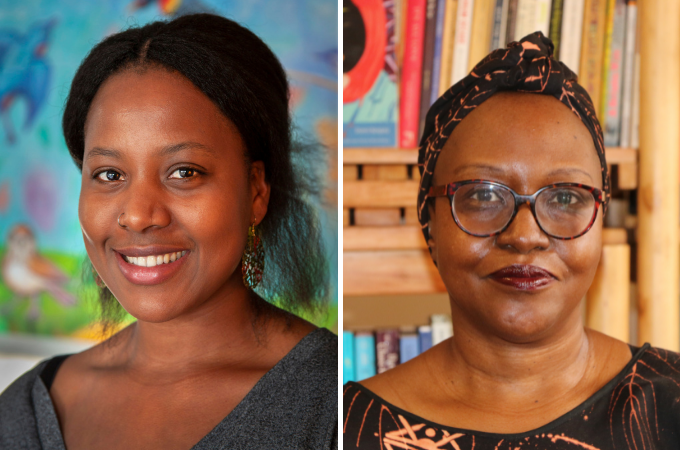 Doreen Baingana’s and Iryn Tushabe’s Caine Prize stories have emotional layers that feel real and raw to the touch. Baingana’s story asks what we see when we look at war through the eyes of a child, while Tushabe’s story is a different kind of conflict, one that involves the turbulent emotion of grief.

Baingana’s story is titled “Lucky.” It tells the story of boarding school boys abandoned by their teachers to face either two warring armies: the Lakwena rebels and the government soldiers. “Ask me what prison is like,” the unnamed character quips, “I’ll tell you: whole hours, days, stretching out like an endless line of ants, filled with nothing but the same routine chores, and then sitting around staring emptily at the same few pimply faces, listening to our stomachs growl, our thoughts roaming the carefree past or a fantastic future, circling, circling to avoid the wide, flat, dry now.” Even though they are “stuck in the path of bullets,” the students irk out the semblance of everyday life. They do their chores, forage for food, even do their math. But, in truth, their situation is much worse than prison. The children are sitting ducks. Any time now, rebel or government forces barge in and do some serious harm.

After reading Baingana’s story, I understood the power of telling a story about war through the eyes of a child. In the eyes of a child, violence appears utterly senseless, and it is impossible to glorify or justify war. Children see things with slightly more honesty, and the world reveals itself to them in blurred contradictions, both enchanted and starkly real.

So when the unnamed character describes the moment when the army finally arrives, his depiction is devastatingly up close. Two students are returning from foraging for corn and daydreaming about the taste of the corn when they are interrupted by gunshots. “TA-TA-TATATA-TA-TATATATA. Like that. On and on, from all around,” we are told. As the students “pile in and scramble under the bunk beds,” you hear the sounds and feel the dread. Everyone is hunched in a fetal position, skin touching skin. They are sandwiched. From such cramped quarters, you smell the desperation, the utter vulnerability. You sense their aching, paralyzing discomfort. Doreen is one of those writers who would leave you broken in less than 5000 words. This story about school children caught in the senseless conflict over power is a beautifully written. But the power of this scene derives from how it shows the real costs of war, not just in lives, but in the ways it exploits vulnerability, leaving behind untold traumas.

Iryn Tushabe’s story, titled “A Separation,” is about a Bakiga primatology graduate student living in Regina, Canada. Like Baingana’s story, the narration is visceral. But where Baingana looks at bodies exposed to the threat of violence, Tushabe looks at the body as the site of loss and longing. Everything in the story—love, loss, desire— is a sensation that binds people across space, across generations, and across realms of existence.

As a child, Harriet knew all the names of the birds in her father’s animal sanctuary in Uganda. She was born by a river, in the forest among animals. She feels a connection to them. Thus, Harriet is no stranger to connecting with otherworldly life. When her grandmother dies in far away Uganda, Harriet has to not only come to terms with her loss but also to figure out ways to reach her beyond the grave.

Tushabe has this rare gift of giving stories a sensory texture that makes moments appear intensely real. On the eve of Harriett’s departure to Canada, her grandmother is making lemon grass tea. I don’t know what it is about this scene and how it was crafted, but reading it felt like being transported to the blissful moment of intimacy between Harriet and her Kaaka. Something about the way Tushape depicts the moment sharpens the reader’s perception. You smell the tingly aroma and feel the warmth of the steaming tea. You sense that this scene has been repeated many times over, that there is a history of comfort here. Home is “citrusy fragrance,” sweet, sticky, and soothing.

The visceral beauty of Tushabe’s narration suffuses everything in the story. The air is redolent with fragrances: lemongrass, jasmine. Hope has a color, and a handshake can send a surge of symphonic sounds to your brain. And home is not a physical place. It is a vast array of sensual experiences that can be activated anywhere.

Baingana’s “Lucky” and Tushabe’s “A Separation” are brilliant pieces. They show the range of style and vitality in contemporary Ugandan literature.