Kahora’s story, published in Granta (2010) is one of five stories shortlisted for the Caine Prize.

Jimmy knew all about being watched. What his mum called love.

Orphaned children and animals are always precarious members of the human family, no matter how “human” they may seem in moments of comfort. Against the backdrop of the Post-Election Violence in Kenya, in 2007, Billy Kahora’s “The Gorilla’s Apprentice” opens with an invocation of this simple fact—the way humans can be animals to other human animals. He does this by showing us an orphan looking into a cage at a gorilla, silently, an animal who was “Captured and Saved from the Near Extinction of His Species After the Genocide in Rwanda,” even as Kenya burned on the headlines of the Sunday Standard, smoke from Kibera intruding on their reverie.

Except Jimmy isn’t an orphan, as it turns out. He has a “Nairobi Orphanage family pass,” but we shouldn’t move too quickly to clarify this counterintuitive jumble of the words “family” and “orphan,” to realize our mistake and forget that we made it. The mistake is the point: Jimmy has a mother—and an absent father, too—but the story told by his “Nairobi orphanage family pass” is a much more unsettling story about the ways being or not being an “orphan” is not a simple matter of having or not having a parent. You can be abandoned by your father, and your mother can refuse to allow you to be a child. Your brother can kill you dead in a moment of confusion, or fear, or even love.

If we know that animals are often “captured” to be put on display in Zoos, to be exhibited like prisoners of war, like Ota Benga, then this is a zoo which does not call itself a zoo: this is an orphanage.

But if a zoo can be an orphanage, can an orphanage be a zoo? What else might be something other than its name? 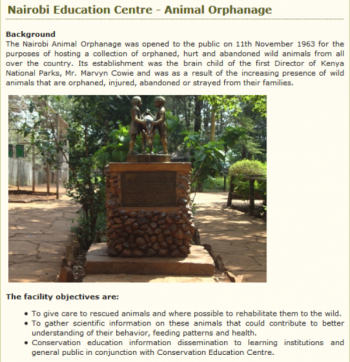 The story told in that moment, at the beginning of the story, is about readerly confusion, when we realize, suddenly, that that the “Nairobi Animal Orphanage” is a place where orphaned animals go, to be rescued, to be saved, to be rehabilitated. But if animals are human, are humans animals? This is a story we don’t like to tell, in which maybe humans aren’t humans, families aren’t families, and nations aren’t nations, a reality we would rather not look at, but which intrudes on our reveries like smoke from burning tires. Sometimes an orphanage is really a zoo, no matter what words are being used; sometimes a child is really an orphan; sometimes being “loved” is really to be watched.

Animals don’t have names, and they don’t speak or weep for the dead, because if they do have and do these things, then they are human. But maybe humans who kill, who mute their violence, who lose their names, are just animals, too. Maybe underneath the Jimmys and Sebastians and Charleses and Winslow, we are just animal meat, as indistinguishable and un-grievable as water in water, and maybe sometimes that reality becomes too pressing to ignore. Sometimes we eat at “carnivore restaurant,” a place where the meat appears as commodities, cleaned up, washed, priced; sometimes we see the violent force that turns a human into a thing.

Billy Kahora’s “The Gorilla’s Apprentice” is a story about a child and a man, a child who knows things and a man who has seen things. The child wants the man to teach him how to talk with the animal, how to turn violence into love, but the man, fleeing from violence and himself, has no answers for him, can tell him nothing. The man hides from being seen, from love; he knows that to be embraced will mean his death. It does. And the child watches, wordless.

Come back next Tuesday for Richard Ali’s review of Diane Awerbuck’s story, “Phosphorescence.” Read it HERE. Aaron Bady is a post-doctoral fellow at the University of Texas, teaching African literature. He writes the blog zunguzungu.

I read and posted on this story yesterday. I thought the author did a decent job of bringing the chaos of the city to life, mirrored in the chaos of Jimmy's life. Sebastian is kind of a symbol,for the natural world of Niarobi, destroyed and near death, now just something to show in a zoo.

[…] Still keeping our promise to bring you reviews of all five stories shortlisted for the  Caine Prize. Last week, we featured Richard Ali’s review of Diane Awerbuck’s “Phosphorescence” and the week before  Aaron Bady’s review of Billy Kahora’s story. […]

[…] promise to bring you reviews of all five stories shortlisted for the  Caine Prize, we featured Aaron Bady’s review of Billy Kahora’s story last […]

In addition to my previous note where I wonder about the redemptive quality of the story and ask about a hero, is it possible that the author wanted the reader to find their own sense of heroism? It's just that the story starts with so much sadness and ends on the same note, I am seeking for an arc somewhere. The characters themselves, apart from Semambo the Professor, are quite dismal and desperate until the Professor, through academic intelligence and insight, 'saves' the say and the gorilla from its misery. I also note a lack of a feminine voice. The drunken mother plays more of a dismissive role than anything else, a failure in the boy's eyes and one of the many reasons, the boy is the way he is. It is a brave topic to write on and I appreciate that.

Thanks Brittle Paper and the reviewers. I appreciate the relation to family, orphans, loneliness and of course the main characters in Jimmy and Sebastian. I saw as well a deep connection we humans can have when we are desperate to reach out because our families are dysfunctional. In a sense, they cannot perform the duty of love well enough and we reach out to the inanimate and of course, animals. Sebastian was rare. he was dying, he had survived a genocide and was very old,which placed him in a vulnerable position and not able to meet Jimmy's emotional needs at this point. It was more evocative when everyone ran away from the zoo during the Kibera explosion. I feel that the post-election violence could have been expounded more, because Sebastian escaped a genocide but died during a post-election violence, not necessarily of it, but during. There was no sense of redemption in the story and the sadness and melancholic feel carried throughout the story.Because there are few characters, it would have been wonderful to get a sense of their diversity but the boy and the gorilla bore such similar characteristics, which of course, could have been Kahora's intention. So, was there a hero? and was there need for one?

Thank you very much Aaron Bady. God bless you. I have read this story more than twice but could not see what you have stated so clearly. Suffice it to say also, that the judges may not have appreciated this story from this perspective. In another post in this blog, I sounded very offensive when I said that this story is an ‘abuse of Africa’s literature’. At some point I wanted to apologize to the blogger, but I think that my anger is now justified. Gorilla is a species of the monkey family. Drawing parallels between animals and humans could be an expression of in-depth artistry for some, but could also be offensive for others; especially at a time when the word ‘monkey’ means a racial slur to any African all over the world. That being said, I now understand with Kahora. He may have drawn this parallel from the depth of his imagination, without the slightest intention to cause any offense. What I don’t understand, however, is how this interpretation could have eluded the judges? How such could have eluded the highest quality of judges in the history of the Caine Prize? Is it by co-incidence that the judges picked on such a story, of over 140 stories submitted this year? Is it possible that the judges did not see this story from this perspective? Is it possible that they may have picked on this story to vent their frustrations at what is going on in Africa? I have followed the Cain Prize for years and read almost all the shortlisted stories every year. This story, Gorilla Apprentice, is the worst mistake ever made in any shortlisted category; needless to say that a decision to award this story the 2014 Cain Prize will stir a lot of controversies all over the world. I appeal to the organizers to please get the judges to explain to readers what they think of this story and why it was chosen.

While I appreciate this review, it seems to me like the work of an intelligent reviewer who is trying to pretend that the story being discussed is more intelligent than it actually is, what with all the circumlocutory attempts to draw parallels (that really don't seem to exist in the original story) between orphanages and zoos.