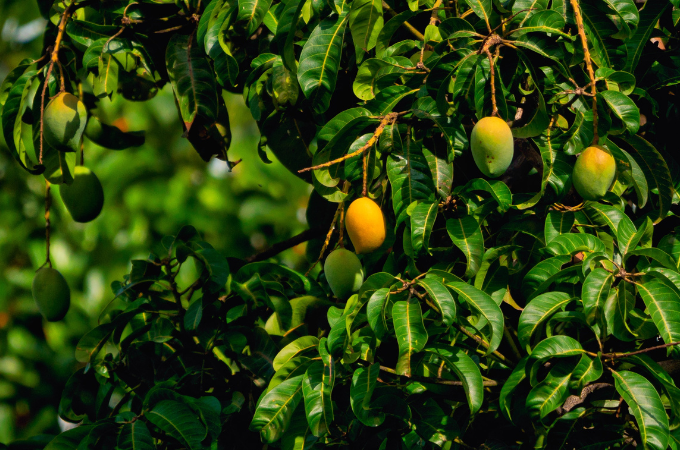 Dry wind scrapes air against air in my lungs, igniting jaggedness in my breath. My feet are whitened, my bones are rigid with cold, and it is mere days to Christmas.

It is also morning—it is harder to tell these days. Harmattan has chased the sun back into the blueness and tucked it safely behind the softness of the clouds. Outside, the wind is whistling its traditional morning praises and the green leaves stained with white dust murmur prayers to the sky. Mama’s mango tree has an enigmatic scar slashed across its hunched, rugged bark. It stands at the centre of the family compound, with wrinkling leaves, like an anchor to this mirage. Mama said that she had it planted before the war—a mango licked clean until its seed was stripped bare, pressed in moist soil and forgotten—years before a consummation brought me to flesh, before I was but a spectre of light, a theme of hope. Before Mama was a mother of four. Relatives said they hoped for my birth, that I would have a penis between my legs and that when the time came, I would grow dark hair in the right places. So, they threw prayers with hopes in their hearts and desire in their open bellies.

Their Amen was heard. Their hope ushered me here. As for me, to my surprise, I have never quite grasped the ordinance of hope. It seems insane to believe things will happen just because I hope for it. Hope is the rumbling in the sky. Hope comes when the dust settles, that rope tugging from within my chest in the rattle of gunfire or the silent slipping away of life or the greasy hold of love. Yet sometimes it is all I have to carry on my chest—like an invisible totem that fastens me to my impermanence. The tree’s leaves grow crisp every December but it still waits eagerly for the smell of fresh water from the sky—whatever it brings and perhaps even whatever it will claim. If there is one thing I am sure of, it is that there must be a carrying. Must.

And so, the tree prays for rain in the heart of December, offering some of its children to the ground. It threatens to splinter its branches if its prayers go unanswered. It, after all, has the support of Denka, as he too has been dehydrated for many months. There is the rustling of leaves and the impending threat of an arid cyclone, but in all the chatter I can hear earthly melodious gyrations. I do not know how to tell Mama I hear them—the dusty leaves and the drooping mangoes and sometimes, the mother they pray to— I am sitting on the concrete floor, my back is lodged inside Mama’s wrapper, between half of her legs. I can smell the uziza wafting from her. Wallahi, she spends too much time in the warmth of the kitchen fire. Her wise fingers are burrowing through the countless twists and turns of my hair, black, thick, full, rebellious. The chanting is louder, clearer, raw.

“Why didn’t you ever cut it down?” The gyrations tone down as the words flounder out of my mouth. The octave in the air is arcane, almost corrosive. I am afraid. But you have to understand—I could not believe that something so immovable could survive that much: the blood, the bullets, the gore. The trembling that accompanied the stillness. The pounding suspense that dropped before the blasts. The spilling of mortars. The scar, December after December. Perhaps it is because without a speck of doubt, it believes in its roots—this battle-scarred mango tree—and the darkened soil that sweeps upwards around its ankle, that its fruits still pulp with yellow in July. It is a wonder that life can sprout from such a thing living with such a scar. So, you see, I didn’t ask so that it could be cut down. I asked because perhaps, I want to know of its courage. I have to know, because if the rain comes, Mama will not stay. She doesn’t like the smell of rain. I will tell you the truth—the chanting is of a language I know. It says it is waiting for rainfall. It says I should be ready. When the falling water runs across its scar, there will be a following or a leaving behind. Either way, it says, hope is never empty-handed.

Mama doesn’t answer my question. I know why but I will not say. I cannot. I do not yet have the courage. So, I let her scoop a handful of shea butter and spread it into my hair. I know that the answer lies with the mango tree, and the mother it says its prayers to, I won’t lie. I will stay with Mama until rain takes her from me. New rain brings hope. New rain also carries hope away. The final washing away. The beginning that conquers the end. The stubborn streak of green in the yellowing leaves, the thing that came before the mango tree, the thing that will leave after. Hope is what watered Mama in my imagination. She still hasn’t told me why she didn’t cut it down. I know she never will. It is from a scar inside me that she grows. Hope brought her here and made her come alive. Hope is the last thing that will go after she fades. The thing before the coming and going. The last dance.

Photo by Rajendra Biswal on Unsplash Kelvin Ikechukwu Kaine is a Nigerian writer who is captivated by the art of poetry and prose. He self-published a collection of poetry titled 'A Constellation of Words' in 2018 and is currently working on a second collection titled 'Of Cedarwood and Firebirds'