Love stories come in many forms. Our favorite, to date, took the shape of a series of exchanges on Instagram between Nigerian writers Ayọ̀bámi Adébáyọ̀ and Emmanuel Iduma. These “Insta love notes,” as we’re calling them, document the evolution of their relationship — from the moment they first met, to their wedding day.

Iduma first began the exchange with an Instagram post dated January 27 that recalls his initial encounters with Adébáyọ̀.

I should begin with how long I’ve loved you, to what extent, and with what intensity.

Throughout the weeks we attended rehearsals as members of a choir, there were initial encounters. But none was as decisive as when, sitting alone at the back of the theatre on the last day of the music festival, you said to me, “I am also a writer.”

From then on life was grander. With you I knew to state my ambitions without inhibition; just as when, weeks after our chat at the theatre, I brought to you a floppy disk containing the manuscript of a novel. This was 2007. Fourteen years have passed in swathes of companionship, broader than we first imagined. And I shudder in amusement to think of how I was then, gangly and shy in front of you, our future unknown to me except as the whisper of a plea: Stay with me. The very next day, on January 28, he shared another Instagram post that included photos from their wedding and memories of that day.

In the first month, when the reverb of our vows had yet to still into a steady hum, I often woke with a rush of astonishment. It was becoming habitual to mutter “my wife” when I thought of you; the welcome finality of those words. The language of my desire, as well as its appeal, had been transformed.

And now, several months later, it is as if, with you, marriage is a marvelous sequence of clarifying moments.

Do you recall how we danced at our wedding? We had forgotten to finalize on a song, after weeks of worrying the question. We settled without fuss on Patrick Watson’s “Sit Down Beside Me.” I remember the clumsiness of our moves when, midway through, the tempo quickened and dragged for nearly the remainder of the song. I wondered how the guests appraised the song and our response to it. I shunned the thought as soon as I could. Then we found our rhythm, or better to say we made our beat—the croon in my voice as I leaned closer, your tender sway. On the following day, January 29, which was Adébáyọ̀’s birthday, Iduma shared a “final note, at least for now,” that declared the joy he finds in being with her, even just looking at her.

A final note, at least for now:

Two years ago, I made a copy of your photograph and wrote the following around its edges: “I am interested in seeing my eyes only when they look at you.” It’s a quote from Barthes’ eccentric autobiography, and I like that it says as much about my need to look at you as it does about how often I do that.

(It’s your birthday today, so permit me this repetition: I am interested in seeing my eyes only when they look at you.)

What I long for, throughout the unbroken length of our days, is the pleasure of looking at your face. Maybe that sounds mawkish, but I’ll withdraw no sentiment from these declarations.

How within your beauty shall my desire hold a plea? Adébáyọ̀’s responses to these notes came over the next few days. In the same way that Iduma began his love notes by sharing his earliest memories of his relationship with Adébáyọ̀, Adébáyọ̀ began her love notes with her earliest memories of her relationship with Iduma. In her first “love note,” posted on January 30, she shared her memory of attending Iduma’s twentieth birthday party. By that point in time, they had already known each for three years. Now, Iduma was born in 1989, so doing some quick math, that means Iduma and Adébáyọ̀ have known each other since…2006!

To attempt an estimation of how long I have loved you, I  begin with that party in the park on your twentieth birthday.

I remember how  we stood apart by a brook, preoccupied with a discussion that mapped the landscape of our particular obsessions. I was strangely unconcerned about questions of propriety. It was your party and I had you to myself, metres away from your guests. Yet, you did not seem restless to mingle with other friends who had come to celebrate you.

We had been companions for three years already when you turned twenty.  In that time, bound by our aspirations, we had organised three writing workshops. I wonder now at our audacity. How within months of meeting each other, we ran the first workshop as teenagers. In your company I had become bolder, my ambitions more probable because you shared them too.

Perhaps it was not so strange then, that as the party continued, I did not tell you to return to your guests. I wanted you with me because even then, the words we shared echoed the sound of things to come. The very next “love note,” which Adébáyọ̀ shared the very next day on January 31, confirms that the two of them have been companions for fourteen years. Doubtlessly in response to Iduma’s second note, Adébáyọ̀ also brings up memories of their wedding, and shares additional photos from that day.

Once, I sent you a note that included this line from James Salter: “The sum of small acts begins to unite them, the pure calculus of love.”

This is what I recall of our first dance as a married couple. Confetti swirled around us as our family cheered and photographers pleaded with us to look their way. The excitement was disorienting. Then you stroked my cheeks and whispered into my ear. “Don’t worry about that,” you said, “it’s just you and me.” Your voice was a steadying embrace that drew me into the pleasure of your presence.

Through fourteen years of companionship, you have been my friend, lover, partner, brotherman. One designation looping into the other, each word insufficient to capture all you are to me. And now in addition, this wondrous culmination – husband. For your birthday today, this quote from a Cavafy poem: “And, for me, the whole of you has been transformed into feeling.”

Another park, a different country. There was no party this time, but, after spending the day together, we were to attend an event. Do you remember how we lost our way? We were almost late, and yet the hour pulsed with potential instead of anxiety.

We spoke of other things as we wandered through the park, our misadventure cushioned by the comfort of each other’s presence. You gave me your cap when the wind pulled at my hair and for the briefest of moments, your hand touched mine. That touch, a spark, the first flicker of desire.

I want your hand in mine, now as always, for all the moments when words would not be enough. This entire exchange has us reeling with delight — not only in celebration of Iduma and Adébáyọ̀’s relationship, but in recognition of the cleverness with which they have told their love story. Here’s to Iduma and Adébáyọ̀, to the idea of “Insta Love Notes,” and above all, to love!

*all images from Iduma and Adébáyọ̀’s Instagram accounts, found here and here. 5 Times African Authors Made Us Smile in 2022 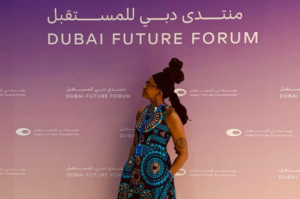