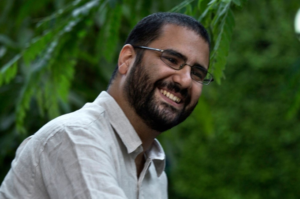 Congolese author Fiston Mwanza Mujila curated the second edition of the Weltwortreisende, or World Word Travelers. The festival took place from October 20 to 22 in Graz, Austria.

Organized by Mujila and Robert Reithofer, Weltwortreisende, also known as Transnational Literary Days, are “a crossroads of literature, but also as a meeting place for languages ​​and world views.” Some of the discussion topics include flight, exile, nationalism, colonialism, and war.

The theme of October 20 was “History and its Stuff.” The readings and discussions for the day were held at the nonprofit ISOP (Innovative Social Projects) in Graz. The African authors attending included Maaza Mengiste, In Koli Jean Bofane, and Abdelaziz Baraka Sakin.

All authors come from different countries, do not write in the same language and do not belong to the same generation. Their literary universes can be read as detail-charged memorials in the quest for historical truth and justice. In dealing with slavery, colonialism and wars as central issues, the vocation as writer fuses with the work of historians. Writing becomes a need, an obsessive necessity; an anthem against amnesia, the instrumentalization of history and forgetting.

The theme of October 21 was “Language as an island of freedom.” The events for the day were held at the Forum Stadtpark. The African authors attending included Jennifer Makumbi and Vamba Omar Sherif. Mujila commented on Day 2 (originally in German, translated here), saying :

The quest to break prejudices, stereotypes and dogmas is leading the way through the literature of the evening. The authors insist that language is an island of freedom. In her writing, Jennifer Nansubuga Makumbi addresses oral storytelling traditions of the Muganda tribe, particularly myths, legends and popular sayings discredited during colonial times. Bachtyar Ali has lived in Germany for many years, but still writes on Sorani so that the “first language” does not die. Vamba Omar Sherif writes in English and Dutch, but is inspired by fairy tales from Liberia. Iris Hanika creates an experimental language in her latest novel.

October 22 focused on the theme “World Travelling Children,” and the events took place at the Children’s Museum. Weltwortreisende was organized by Forum Stadtpark and ISOP, in cooperation with the Kulturvermittlung Steiermark, the literary magazine Lichtungen, and the Afro-Asian Institute of Graz.

Keep scrolling to see some of the photos from the three-day festival!