Readers may remember Sokoh from our The Decade Project series “Eat the Book,” for which she contributed reviews and recipes of dishes inspired by books like How to Cook Your Husband The African Way by Calixthe Beyala, My Sister, The Serial Killer by Oyinkan Braithwaite, and Igifu by Scholastique Mukasonga.

Sokoh, founder of the blog Kitchen Butterfly, has now launched Feast Afrique, which is dedicated to the history of African cuisine. The project, which took over eight months to complete, features books from 1828 to the present on food migration that was sparked by the transatlantic slave trade as well as African recipes from around the world. The books are made available through The Internet Archive, HathiTrust, and The National Academies of Science, Engineering, and Medicine.

In a statement on the site, Ozoh explains her inspiration for the project:

African, African-American and African-Inspired knowledge are not often acknowledged in culinary practice. For years, I’ve been collecting Nigerian and West African cookbooks, many of which are out-of-print. The Jemima Code (2015) by Toni Tipton-Martin widened knowledge of the wealth of resources documenting the culinary excellence of Africans and African-Americans.

I want people to know this and see that African culinary excellence exists because it’s hard to know who you are without knowing your history.

As Chinua Achebe, the great Nigerian writer said ‘Until the lions have their own historians, the history of the hunt will always glorify the hunter.’

Congratulations on the launch of this fabulous project, Ozoz! Click here to start borrowing books from Feast Afrique, and learn more about Sokoh’s inspiration in the video below. 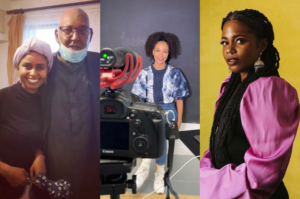 African Literature on Instagram Vol.10 | Writers Out and About