Of Seas and Rivers by Julius Bokoru | An Essay on History, Water, & Violence

“Of Seas and Rivers” is a meditation on history as a story of violence stage on the great waters of the world. I am glad to have Julius Bokoru’s work featured for the first time on Brittle Paper. His writing has a subdued cadence that easily turns into poetry when you listen closely. — Editor’s Note I am standing at the beach of Ekene, a small Southern Ijaw whitebread, and I am staring at the Atlantic Ocean waltz away with time and wind and space. Today I’m alone, standing defeated and stunned, fazed by the massiveness of the swallowing space that lends frightening prominence to infinity. Behind me, frail branches of coconut and Banana trees dances with the moistened winds. Their green and yellow-green fruits bounces in line with the rhythm, quite appealing.  Before me, there is the sea. Waves crash at my toes and become a million bubbles of silver.

I am fazed, not because a jade forest stands between me and Ekene and that I am alone in this beach, no. I am fazed by the sights and sounds of the ocean, the whisper of winds and salt, howling, maybe vocalizing. The perfect blend of silver and blue, royal blue, sky blue, the sharp curves, the unquantifiable liters, the stroke of brush on earth, on reality. God must have been thinking of Van Gogh when He created the ocean.

I imagine Copernicus and Galileo, centuries ago, staring into the open sea like I am doing today, and asking the same fundamental questions: What does it mean to be man? Copernicus and Galileo discovered almost a millennium ago that time and space and the seas would forever outdo, outlive and diminish man. They told the Church and the known world that there isn’t any cosmic basin somewhere containing all these flowing waters, neither is the world like a cliff that should have edges and ends.

But bodies of water have character and can act in desperation at times. In 2012 cams in Nigeria and the Cameroons were flung open. They let out torrents of water that the Kinf of Rivers in Nigeria—the Niger— and the queen of rivers— the Benue—could not stomach, or maybe could, but was just intent on punishing man by expelling the prodigal dam waters from their courses, and watching with glee as the waters found alternate routes to the Atlantic ocean. Those alternate routes where fishing villages in the deep ijaw, farming villages in central Nigeria, large markets at Onitsha,  banks at Ahoeda, tertiary institutions at Amassoma and Otuoke, government capitals, thousands of poor and rich homes, churches and mosques and shrines, industrial explosions etc. The waters united with the Atlantic, at the expense of man’s pride and happiness. That movement was purposeful, that movement was lifelike, that movement was intelligent and how dare we say that movement was cynical.

In 1588, an Armada of Spanish ships were headed to the ports of England with canons and flame throwers, ready to bring down Queen Elizabeth’s navy, reintroduce Catholicism and bring an end to the rebellious Tudors. In what became one of the most amazing military concords of man and nature, a tempest blew northward, vanquishing all Spain’s destroyers. It was rightly said that the seas saved England and the crown.

The seas and oceans have always been passionate about warfare. The Aegean Sea, for instance, enthusiastically hosted the famous wars of the Hellenistic civilizations. The sea wasn’t idealized for love or romance or Poseidon or for beauty. She was honored for creating a stage for some of the world’s fiercest wars: the Greko-Trojan war, and some of the world’s most brutal heroes: Achilles, Agamemnon, Hector, Hercules, Odyssey to mention a few.

In Nigeria, two Rivers, Niger and Benue, divide the country just the way the River Thames does London. The Niger is the heart. She does the splitting and from her basins the creeks and rivers of the Niger Delta are filled up. In scattered, somewhat confusing mazes the many Rivers of the Niger Delta flow into each other. River Ethiope, a calm river that seems more green than brownish or silverish, meets Forcadoes at South-east Delta

(In 1583 a small group of Ijaw fishermen halted a Portuguese advance in skirmishes at the River Forcados.)

River Forcados meets the romanticized River Nun at the deeper Delta, somewhere between Bayelsa State and Delta State. The Nun flows through miles, past sand banks and emerald plains and endless canopies of forest, through small creeks and rivulets, past the foot of Ikibiri— the little village were I was born— through Southern Ijaw before emptying her bowels into the Atlantic. It was were, a few years agon, the Nigerian Military suffered some of the most embarrassing defeats in the hands of the Niger Delta Militants who were far more adapted for marine warfare. The waters love war.

I notice today for the first time that, unlike the rivers, oceans and seas do not have a rhythmic flow. Sections of water move as they please, splash as they please and churn as they please. They are strong, wild and free. They would host many great battles and captivate more lovers. They would enchant more men and make life seem short and fragile. They would feed more stomachs and swallow many suns.

Next year, I will return to this beach. Next year, I will be 25 and my nation, Nigeria, will be 101. But when I return here, the Atlantic will still be ageless, not a millisecond older than I left her a year ago. She will still be silver and blue, and orange when the sun streaks to the far deep in the evening. Man may seem weak before this great vastness, but the waters of earth, the rivers, seas and oceans, will at any rate, run out of relevance if man is no more.

Image by Umer Malik via 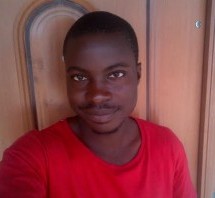 Julius Bokoru is a poet, short story writer and memoirist. His debut memoir ‘The Angel That Was Always There’ will be released by Parresia Publishers as part of the maiden Nigeria Writers Series. He has been a resident writer at the Ebedi International Writers Residency and also a participant of the 2012 Fidelity Bank Creative Writers Workshop. In 2012 the government of Bayelsa state named him among the 50 most influential persons for his literary contributions.

It only takes a deep mind to think and see beyond the surface. While reading I was spellbound And I still am. An incredible piece by an incredible mind.

the way he wraps it up at the end...beautiful. Favorite line "Man may seem weak before this great vastness, but the waters of earth, the rivers, seas and oceans, will at any rate, run out of relevance if man is no more."