He washes his hands in streams she has made.
Rivers flowing beneath her eyes have
Salted the land with the acrid taste of her
Hate.
Wells have risen to pool within her,
catching the cries that would speak her
Hurt.
He washes his hands in streams she has made.
She dreams sonic dreams with high decibels to end tyranny,
With a speak to raise armies and wage wars.
He washes his hands in streams she has made,
Ignoring the pleas of a maiden body slain
In her shame, exposed against her will.
Half drawn clothes,
Untidy bundles of blood
Laid to waste for a rush.
She has made rivers and lakes bitter with the salt of her tears.
Beneath her breast a molten hold burnishes the light she once had
Into a golden strong finish
For those that have laid her to waste.
This is for the mother
Who has stitched another morsel
into one dish of edible corn for our daily bread.
Her who has copied the hands of the creator
And pasted onto the drawing board a new piece to the picture
So that girls everywhere can smile.
She is the surgeon who has carried a knife to battles
To cut open wounds and piece them back to their proper places,
Them skins and flesh scurrying to obey her command.
She has done so.
She has carried life so.
She has melded pen and paper to tell a story,
Not worrying.
Whether the caves within her bring forth life or death
Life or death life or death,
The ringing bells toll and call all humankind to rest.
But she does not stop taking life from death
life from death life from death,
Building bricks upon bricks
stitching together another life in a war zone. 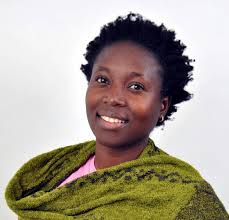 Elizabeth Muchemwa was born in Chirumhanzu, Zimbabwe. She is a poet, writer and theatre director. Elizabeth won second place in the 2014 BN Poetry Award for this poem. She has been performing Poetry since 2006. She has performed at Festivals like HIFA, Intwasa Arts Festival and Protest Arts International Festival, in addition to participating in poetry events like House of Hunger Poetry Slam and Sistaz Open Mic.